In early 2018, TSCNET shareholder Swissgrid, the Swiss transmission system operator (TSO), began preparations for the construction of the new 380kV line in the Rhône Valley between the two substations Chamoson and Chippis, which is to replace the old 220kV line. This new line is of crucial importance for Switzerland’s security of supply, particularly for the transmission of electricity generated in the Valais hydroelectric power plants to the consumption centres in the central Swiss Plateau.

After about 18 months of actual construction, the extra-high voltage line is now taking shape and work is underway along its entire length. But not only do numerous safety measures have to be considered during construction, also the access to some plots of land has not yet been clarified at some pylon sites. These locations are distributed along the entire route of the line. As a decision by the responsible federal authorities is still pending in some cases, Swissgrid has now reviewed the construction plans and postponed commissioning of the new line until summer 2022. As the Federal Evaluation Commission (“Eidgenössische Schätzungskommission”) has given priority to the TSO’s applications, Swissgrid is confident about the further construction of the line.

Swissgrid expects the new 380kV line from Chamoson to Chippis to be commissioned in summer 2022 (picture: Swissgrid)

To avoid an overload of grid elements in western Switzerland during the winter holidays, TSCNET shareholder Swissgrid, the Swiss transmission system operator (TSO), has agreed upon a minimum production with selected regional hydropower storage plants. This is intended to reduce the potential increased and costly need for redispatch during these low-consumption days.

The measure is also necessary because the availability of the transformer at the Bassecourt substation in the canton of Jura is currently limited and the new transformer at Mühleberg in the canton of Berne has not yet been fully installed. Both projects will be implemented in spring 2020. The agreed minimum production in the period from 20 December 2019 to 6 January 2020 is 200MW (off-peak) and 400MW (peak).

With the erection of the last of a total of 57 pylons, the new extra-high voltage line between the Ernen and Ulrichen substations in the Swiss canton of Valais has now been completed. The 30-kilometre section is part of the 380kV Mörel-Ulrichen line project of TSCNET shareholder Swissgrid, the Swiss transmission system operator (TSO). The line upgrade in the Rhône Valley is vital for the future of Switzerland’s energy supply: In order to fully transfer the hydropower generated in the Valais to the urban areas of Switzerland, the lines of the south-western canton must be connected to the supra-regional 380kV transmission grid, particularly in view of the commissioning of the new Nant de Drance pumped storage power station, scheduled for 2020.

The existing 220kV overhead line between Ernen and Ulrichen is already disconnected. Its 177 pylons will be dismantled from spring 2020 and the former pylon locations will be recultivated. Swissgrid is additionally carrying out nature conservation projects of national importance in the vicinity of the new line. Also starting next year, the Swiss TSO will continue its Valais upgrade project with the new construction of the next section between Ernen and Mörel-Filet, which is expected to be commissioned as 380kV line by the end of 2022.

The extra-high voltage line in the Swiss Engadine between Pradella/Scuol and La Punt represents a bottleneck in the Swiss and the European transmission grid. To remedy this shortcoming, TSCNET shareholder Swissgrid, the Swiss transmission system operator (TSO), began upgrading the 380kV line to 2 x 380kV in October 2017. This will increase import capacity from the north, strengthen interconnections with Austria and Italy and facilitate the transport of hydropower in the canton of Grisons. The project also improves security of supply in Switzerland and is part of the “Strategic Grid 2025”, Swissgrid’s ambitious modernisation and expansion plan.

Basically, the upgrade means that Swissgrid will attach a second 380kV line to the pylons, which are originally fitted with only one line on one side. Over the past two years, the TSO has reinforced the mast foundations between Pradella and La Punt and will complete this work in autumn. But Swissgrid has also examined the static of the pylons and discovered that some of them have insufficient load capacity for the second circuit. For safety reasons, it was thus decided to replace 50 of altogether 127 masts instead of reinforcing them. This change has no impact on the routing, but on the schedule: The commissioning of the upgraded line will be delayed by at least one year and is now planned for 2022.

Swissgrid has to erect 50 new pylons for the Pradella-La Punt line (picture: Swissgrid)

The complete transmission of hydroelectric power generated in the Swiss Canton of Valais to the country’s urban areas is essential for the future of Switzerland’s energy supply: Without the connection of the Valais transmission lines to the 380kV grid, only around two-thirds of Valais hydropower can be transmitted as soon as the new Nant de Drance pumped storage plant goes into operation. That is why increasing the voltage of the line between the Chippis and Mörel substations in the Rhone valley from 220 to 380kV is an important part of the “Strategic Grid 2025”, the grid modernisation and expansion plan of TSCNET shareholder Swissgrid, the Swiss transmission grid operator (TSO).

Swissgrid is planning the new construction of a 380kV overhead line with a length of around 44 kilometres, which will bypass and relieve settlement areas as far as possible. The existing 220kV line will be dismantled after the new line is commissioned. As with every grid project, Swissgrid has evaluated both cable and overhead line variants for Chippis-Mörel, with the result that underground installation would not only be very costly and time-consuming but would also not generate any significant added value for the natural landscape.

At the end of March 2019, Swissgrid submitted the planning approval procedure to the Swiss Federal Inspectorate for Heavy Current Installations (Eidgenössisches Starkstrominspektorat – ESTI) and also engages in dialogue with the population, the municipalities, the authorities and associations. The TSO’s current planning foresees commissioning of the line in 2025, but in the event of objections and legal proceedings, initial operation may be delayed by several years.

Swissgrid will build a new 380kv overhead line between Chippis and Mörel in Valais (picture: Swissgrid)

Official opening of substation in Ticino

The commissioning of the modernised Avegno substation in the district of Vallemaggia in the Swiss canton of Ticino is a landmark achievement for TSCNET shareholder Swissgrid, the Swiss transmission system operator (TSO): “Since Swissgrid took over the Swiss transmission grid in 2013, it has been the first substation project to be fully implemented by the national grid company,” explains Maurice Dierick, Head of Grid at Swissgrid.

The Avegno substation is an important hub of the Swiss transmission network, both regionally and nationally. In addition, it connects the Verbano hydropower plant to the national extra-high voltage grid. Construction work at Avegno began in October 2016 and will be completed by the end of November with the dismantling of the old 220kV open air switchgear. Already in April 2018, the new gas-insulated switchgear (GIS) was connected to the grid. All in all, Swissgrid has invested CHF17m (almost €15m) in the modernisation of Avegno.

The Innertkirchen substation in the Swiss canton of Bern is an important hub of the national transmission system. As the old 220kV open air switchgear at Innertkirchen is somewhat outdated, TSCNET shareholder Swissgrid, the Swiss transmission system operator (TSO), replaces it with a 380kV gas-insulated switchgear (GIS). The substation modernisation is not only important for the regional long-term security of electricity supply, but also for ensuring the transmission of green energy from hydropower plants in the cantons of Bern and Valais to the centres of the Mittelland.

The conversion work started with a symbolic turn of the sod on 15 May. Since the building for the new GIS will be erected next to the existing outdoor switchgear, the operation of the substation can be fully maintained during the construction period. Investments for the entire project amount to around CHF33m, and commissioning of the new facility is scheduled for mid-2021.

Carinthian transformer connected to the grid

The substation in Obersielach in the southernmost Austrian state of Carinthia is an essential component of the nationwide modernisation process, with which TSCNET shareholder APG, the Austrian transmission system operator (TSO), adapts its grid to the high requirements of a sustainable energy future. Last September, a large additional 380/220kV transformer was delivered to Obersielach ‒ due to its heavy weight in three parts – and then it took six months of installation work and extensive functional testing, before the new device could finally be connected to the grid on 26 April 2018. Further upgrade measures at the substation are still pending and completion is scheduled for autumn 2019. Overall, APG is investing round €38m in the operating site.

The Obersielach substation is the most important power hub in Carinthia and one of the largest substations in Austria. The commissioning of the new transformer will not only ensure the regional long-term security of electricity supply, but also improve the use of climate-friendly wind energy by means of interconnecting the wind farms in Upper Austria with the Carinthian pumped storage power plants in Malta and Reißeck. Surplus wind power can thus be transported to these “green batteries” and stored there. If necessary, the electricity can then be retrieved again from the storage power plants. Apart from that, the five largest Carinthian hydropower plants on the river Drau feed directly into the Obersielach substation.

In order to secure the long-term security of electricity supply in the Western Mühlviertel in Upper Austria as well as to improve the supply situation in the greater Linz area, TSCNET shareholder APG, the Austrian transmission system operator (TSO), is upgrading its substation near the Jochenstein Danube hydropower plant on the Austro-German border. These modernisation measures include a new 220/110kV transformer.

In September 2017, the 280-tonne transformer was delivered by ship across the Danube to Jochenstein. After five months of assembling and extensive functional tests under high-voltage, the state-of-the-art device was finally connected to the grid at the end of March 2018. The commissioning marks the completion of all construction work at the substation, with which APG ensures that green electricity from the Jochenstein hydropower plant continues to be safely fed into the Austrian transmission system. In total, APG invested €10m in the supply security of the region.

Line upgrade in the Engadin Valley

A symbolic cut of the spade was the starting signal for the elimination of the bottleneck within the Swiss as well as the whole European transmission system, which is the power line in the Engadin Valley between Pradella and La Punt. To enhance the existing line with a length of 49 km, TSCNET shareholder Swissgrid, the Swiss transmission system operator (TSO), appends an additional 380kV circuit. Swissgrid also modernises the Pradella substation by substituting the old overhead station with a 380kV gas insulated substation.

The construction projects in Engadin are part of “Strategic Grid 2025”, Swissgrid’s demanding grid modernisation and expansion plan. They will increase grid stability and supply security in Switzerland. By providing capacities for the transmission of electricity from Grisons hydropower and by reinforcing interconnections to Italy and Austria, the building measures have beyond that a considerable European dimension. Preparatory works for the line upgrade started in the summer of 2017 and the commissioning of the expanded power line is expected in autumn of 2021. The new Pradella substation will probably be connected to the grid in 2020. 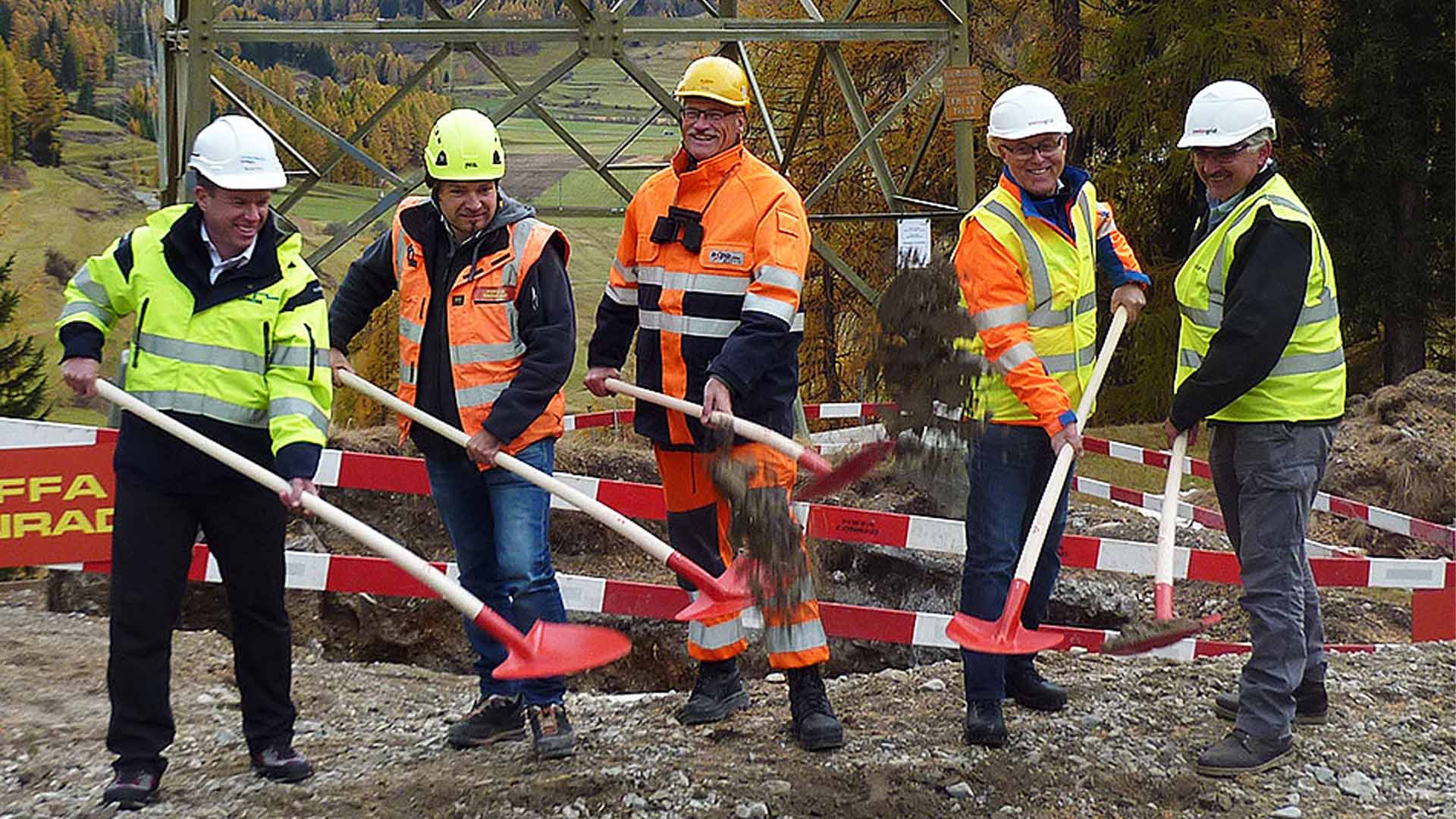