With a dozen operating offshore connection systems for wind farms in the German North Sea totalling a transmission capacity of 7.132GW, the Dutch-German transmission system operator (TSO) TenneT has already in 2019 exceeded the German government’s expansion target for offshore wind energy capacity for 2020 by more than half a million GW. A further 900MW will be provided by DolWin6, like the predecessor projects DolWin3 and BorWin3 a high-voltage direct current (HVDC) connection. The DolWin kappa offshore platform in the Wadden Sea near the island of Norderney will convert the three-phase wind current into DC for transmission via a 45 kilometre submarine cable to the East Frisian mainland and from the landing point via an underground cable, also around 45 kilometres long, to the TenneT site in Emden/East.

Here, the TSCNET shareholder is constructing the DolWin6 onshore converter station and a substation on 23,500m² to reconvert the DC into three-phase current for feeding into the onshore extra-high voltage grid. A significant milestone for DolWin6 was reached on 27 May: The laying of the foundation at the converter construction site was celebrated in Emden/East by embedding a time capsule with coins, a regional daily newspaper, and construction plans into the foundation stone. Due to the Covid-19 pandemic, the event was only celebrated with the most important project managers from TenneT and the plant constructor Siemens.

Concrete preparations for DolWin6 began in the summer of 2017 and 2018 with horizontal drilling on Norderney. In September 2019, the foundation work commenced in Emden/East. Work on the DolWin kappa offshore platform at a dockyard in Cádiz/Andalusia also started in mid-2019 and the DolWin6 cable laying will follow from summer this year. The completion of the HVDC offshore connection is scheduled for 2023.

TenneT celebrated the laying of the foundation stone for the DolWin6 converter in Emden/East (picture: TenneT)

The so-called DolWin wind farm cluster in the southwestern part of the German Bight is an important component of Germany’s future regenerative energy supply. TSCNET shareholder TenneT, the Dutch-German transmission system operator (TSO), is responsible for transferring the DolWin energy ashore. The DolWin1 and 2 onshore connections are in operation since 2015 and 2016 respectively, and DolWin 3 is ready for feed-in since September 2018. The other ongoing projects, DolWin 5 and 6, are also making good progress.

DolWin6 is a 900MW DC connection with a length of 90km. The associated offshore platform to convert the three-phase current generated by the wind farms into DC is DolWin kappa. Half of the 90km distance is covered by submarine cables and the other half by underground cables to transport the electricity from the landing site in Hilgenriedersiel to the TenneT facilities in Emden in the Lower Saxony region of East Frisia.

On the grounds of the Emden/Ost substation, the TSO is building a converter station and a transformer station to convert the DC back into three-phase current and feed it into the onshore grid. The first construction phase of the DolWin6 onshore converter station has now begun with the foundation work. In the next 6 months, 1000 piles with a length of up to 24 meters will be drilled into the ground to create a stable foundation for the station.

The Dolwin3 grid connection for offshore wind farms in the south-western part of the German Bight has the capacity to supply more than one million households in Germany with green energy. The 900MW DC connection – the third in the DolWin cluster – is carried out by TSC member TenneT, the Dutch-German transmission system operator (TSO), and GE, the general contractor of the whole offshore project. With the installation of the DolWin gamma converter platform, another major step towards the successful completion of Dolwin3 has now been taken.

DolWin gamma was shipped on 15 June in Warnemünde harbour in the German federal state of Mecklenburg-Vorpommern. From here it took six days along the German and Danish coast to reach the final destination in the north of Borkum island within a distance of 80 kilometres to the coastal line of Germany. During spells of fine weather the platform was installed onto the so-called jackets, the platform substructure that already had been erected in 2016.

DolWin gamma converts the AC produced by the wind farms into DC, which is transported via submarine and underground cables to the onshore converter station Dörpen West, where the reconversion into AC takes place. Wilfried Breuer, member of TenneT’s executive board and Director Offshore, declares: “The converter platform is one of the largest visible indicators of the German energy transition. Flagship projects such as DolWin3 are essential to provide customers from the north with wind power and to make renewable energy a reality.” 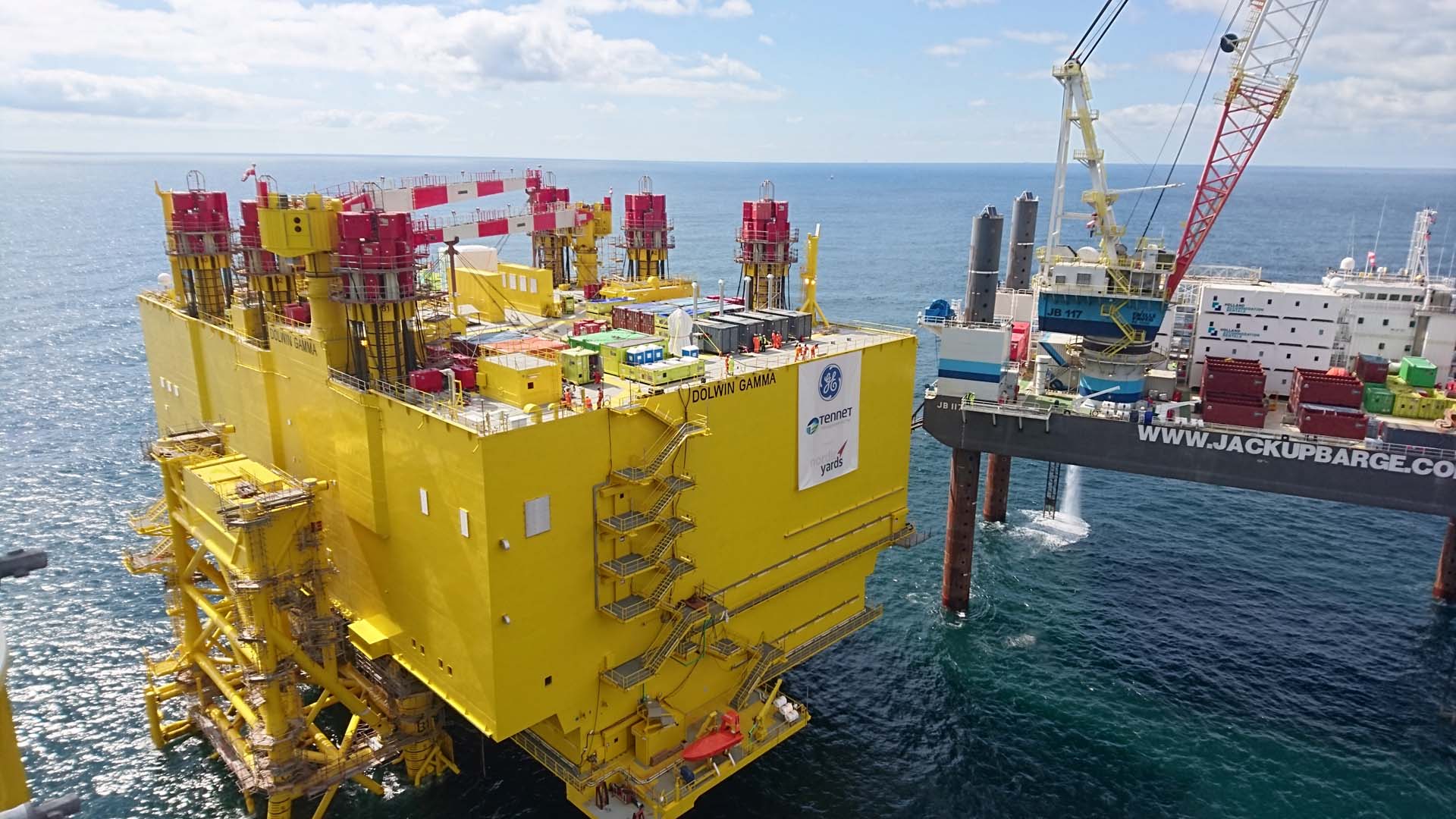