SuedLink, SuedOstLink and A-Nord are large-scale DC connection projects that are essential for Germany’s low-carbon energy future, since these so-called “Stromautobahnen” (power highways) will transport green electricity generated in the north and east of the country to the consumption centres in the south and west. The three power lines will be implemented predominantly via underground cabling and are collaborative efforts of the four German transmission system operators (TSOs). TenneT and TransnetBW cooperate on SuedLink, 50Hertz and TenneT join forces on SuedOstLink and A-Nord is carried out by Amprion. Together with Ultranet, a joint project with TransnetBW, A-Nord forms the Korridor A.

The four TSCNET shareholders intend to install innovative plastic-insulated DC cables with a voltage level of 525kV in these projects. So far, 320kV cables have been used for comparable DC connections in Germany. As a matter of fact, it will be the first use of 525kV underground cables worldwide, which underlines the pilot character of the three high-performance connections. The decision by the TSOs was preceded by an extensive test phase on the technical suitability of the 525kV cables. The pre-qualification tests according to international standards of the Council on Large Electric Systems (CIGRE) were successful and proved that the 525kV cables are reliable and safe.

A higher voltage level of the cables translates into more transmission capacity. This has two possible effects for the planned DC lines, assuming technical feasibility for the entire system: On the one hand, more electricity can be transmitted in a certain corridor with the same number of cables. On the other hand, fewer cables are required to transmit the same power compared to 320kV cable systems. This allows the routing to be designed narrower, which reduces excavation work and environmental impact.

The picturesque Šibenik is the oldest native Croatian town on the Adriatic shore and steeped deep in history. From 5 to 8 November however, the coastal town was also highly future-orientated, when Šibenik set the scene for the 13th Croatian session by the Council on Large Electric Systems (CIGRÉ).

More than 900 experts regarding power plant related issues participated in a record number of papers, presentations and also excursions to technical facilities, thus turning the 13th HRO CIGRÉ Session in the most succesful one to date. The topics discussed in sixteen workgroups covered a multitude of energy aspects, such as substation design and maintenance, smart grid and renewables integration, transmission and distribution coordination, regulatory questions, market models or new techniques for increasing transmission capacities.

TSCNET shareholder HOPS, the Croatian transmission system operator (TSO), co-hosted the event. Its opening adress was held by Miroslav Mesić, Ph.D., President of the HOPS management board and HRO CIGRÉ President. A presentation of the Croatian-Slovenian smart grid project SINCRO.GRID, in which HOPS cooperates with further TSCNET shareholder ELES, the Slovenian TSO, was also part of the opening ceremony.

“Transformer Research and Asset Management” was the topic of the 4th international colloquium by the Council on Large Electric Systems (CIGRE). The event took place from 10 to 12 May in Pula, the largest city in Istria county in Croatia, and was organised by the CIGRE National Committee of Croatia.

225 experts from 25 countries participated in the colloquium, dealing with such issues as numerical modeling, transformer life time management or materials, components and new technologies. Dr. sc. Miroslav Mesić, President of the Management Board of TSC member HOPS, the Croation transmission system operator (TSO), emphasised in his introductory address the high significance of effective transformers as “one of the most important components in the power system”. 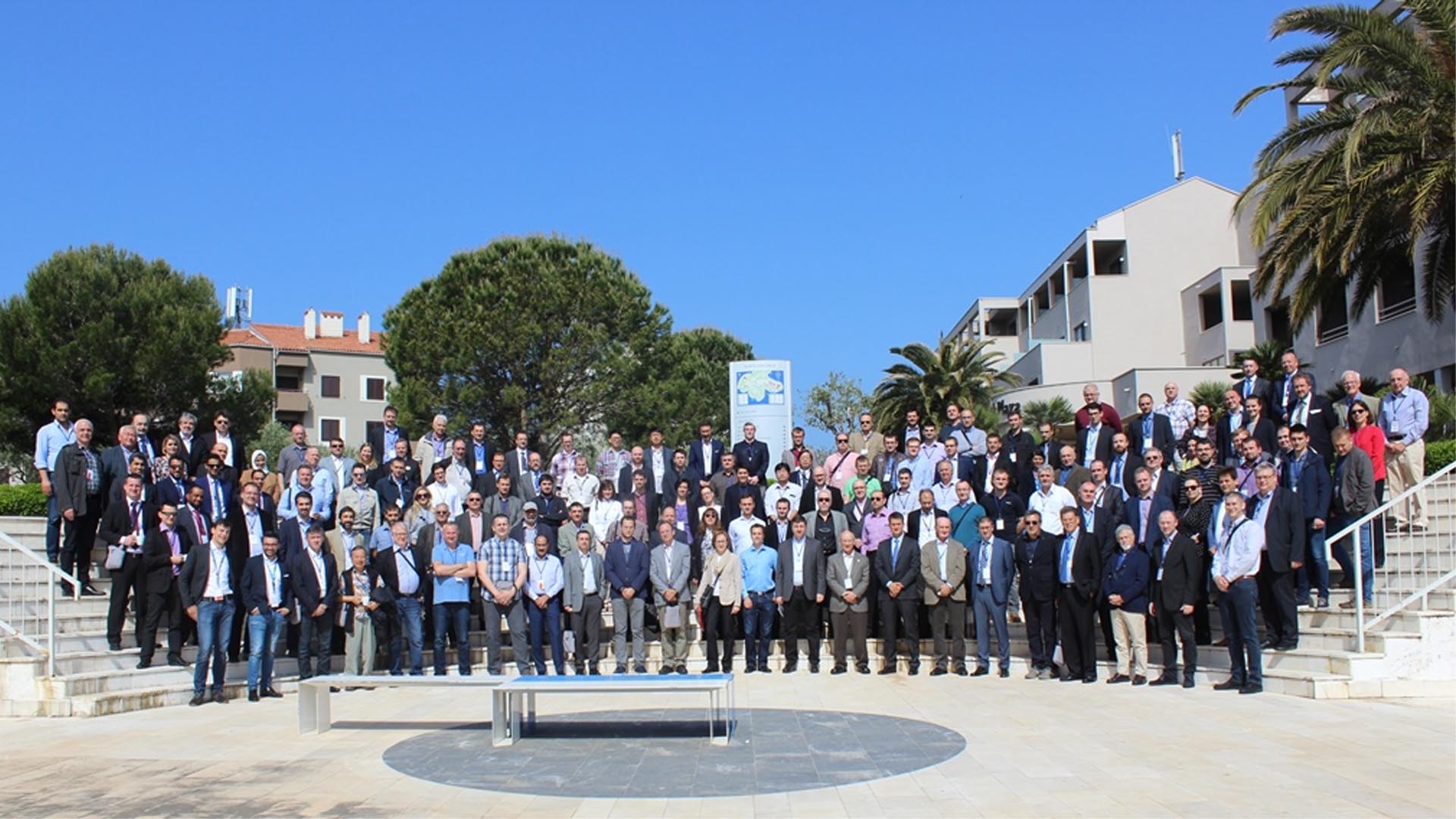 Large amounts of energy from renewable sources are produced in the north of Germany while the consumption centres are situated in the industrial south. To bridge the gap between the producing north and the consuming south, high performing power lines are utterly needed. Two of these envisaged extra-high voltage lines are the SuedLink-line from Schleswig-Holstein to Bavaria and Baden-Württemberg and the SuedOstLink-line from Saxony-Anhalt to Bavaria.

In late 2015, significant changes in the federal legislation regarding the German energy transition came into effect: In cases of new construction projects underground cables are to be favoured over overhead lines. This affects directly the planning for the two key projects of the energy transition, SuedLink and SuedOstLink. In order to implement the legal specifications efficiently, TSC member TenneT, the Dutch-German transmission system operator (TSO), and the further three German TSOs and TSC members, 50Hertz, Amprion und TransnetBW, have initiated long-term test series on the newest generation of extruded synthetic cables. These high-performing direct current cables are designed to withstand high transmission rates up to 525kV. Therefore they are capable of reducing the land usage and environmental impacts.

The prime subjects of the joint studies are the long-term durability and ageing behaviour of the cables. The individual tests will largely follow an internationally recognised recommendation by the Council on Large Electric Systems (CIGRE, Conseil International des Grands Réseaux Électrique). The tests will take place in independent institutes authorised by the four cooperating TSOs. 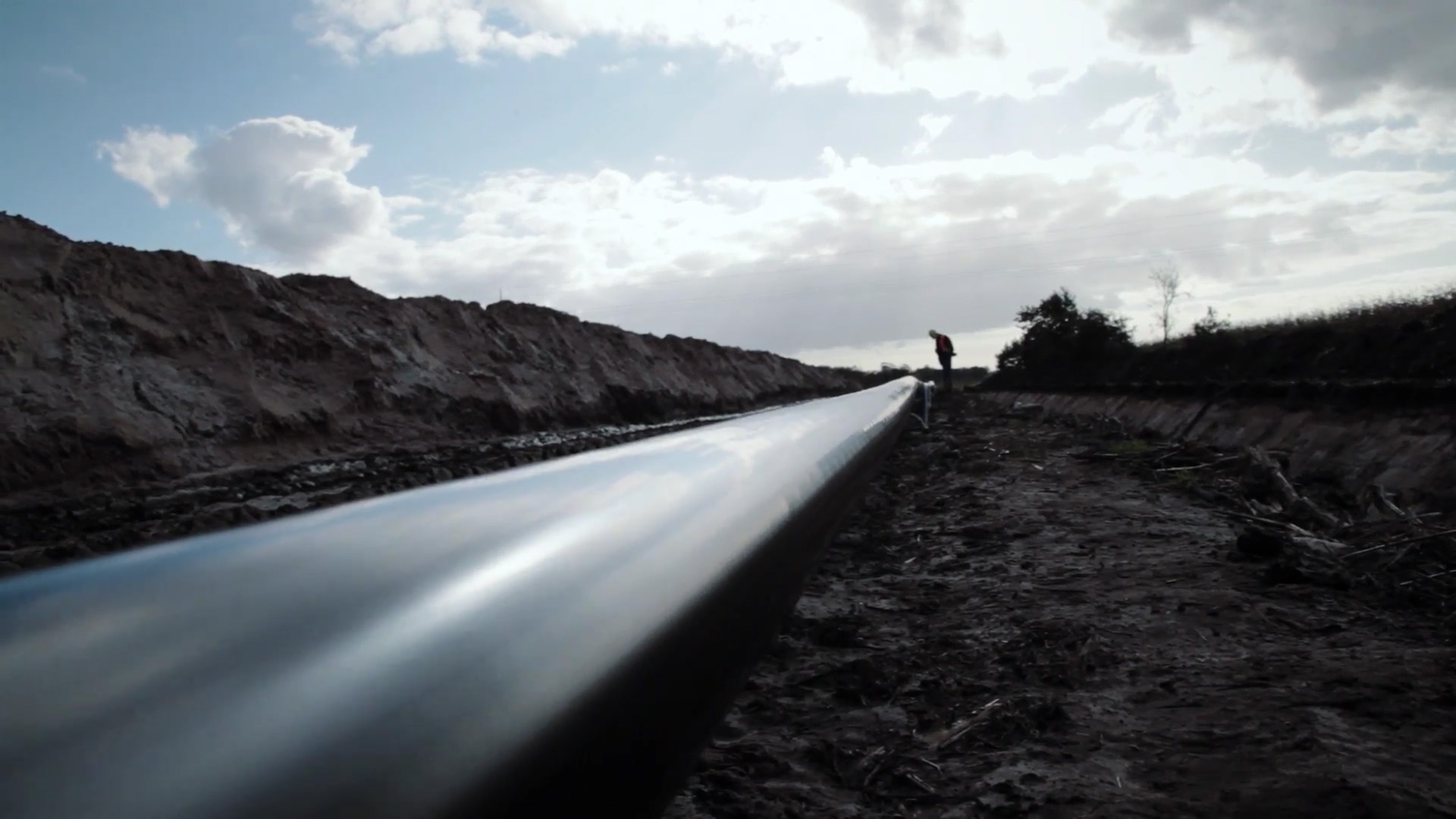 Until this coming Friday, 26 August 2016, the 46th CIGRE Session remains in full swing at the Palais des Congrès in Paris, France. The biennial event hosted by the Council on Large Electric Systems (CIGRE, Conseil International des Grands Réseaux Électrique), an international non-profit association for promoting the collaboration of international energy experts is easily to be recognised as the premier opportunity for representatives and specialists from the worldwide power industry to meet and exchange know-how and business practices.

Given the high prestige of the CIGRE Session, it is more than natural that delegates from European transmission system operators (TSOs) and TSC members play a prominent role in the conduct of the event. Not to mention the fact that the international coordination between TSOs is one of the featured topics of the 46th CIGRE Session. Representatives from TSC members share their knowledge especially by means of contributing to three study committees dealing with aspects of system management (C 1: “system development and economics”, C 2: “system operation and control”, C 3: “system environmental performance”). 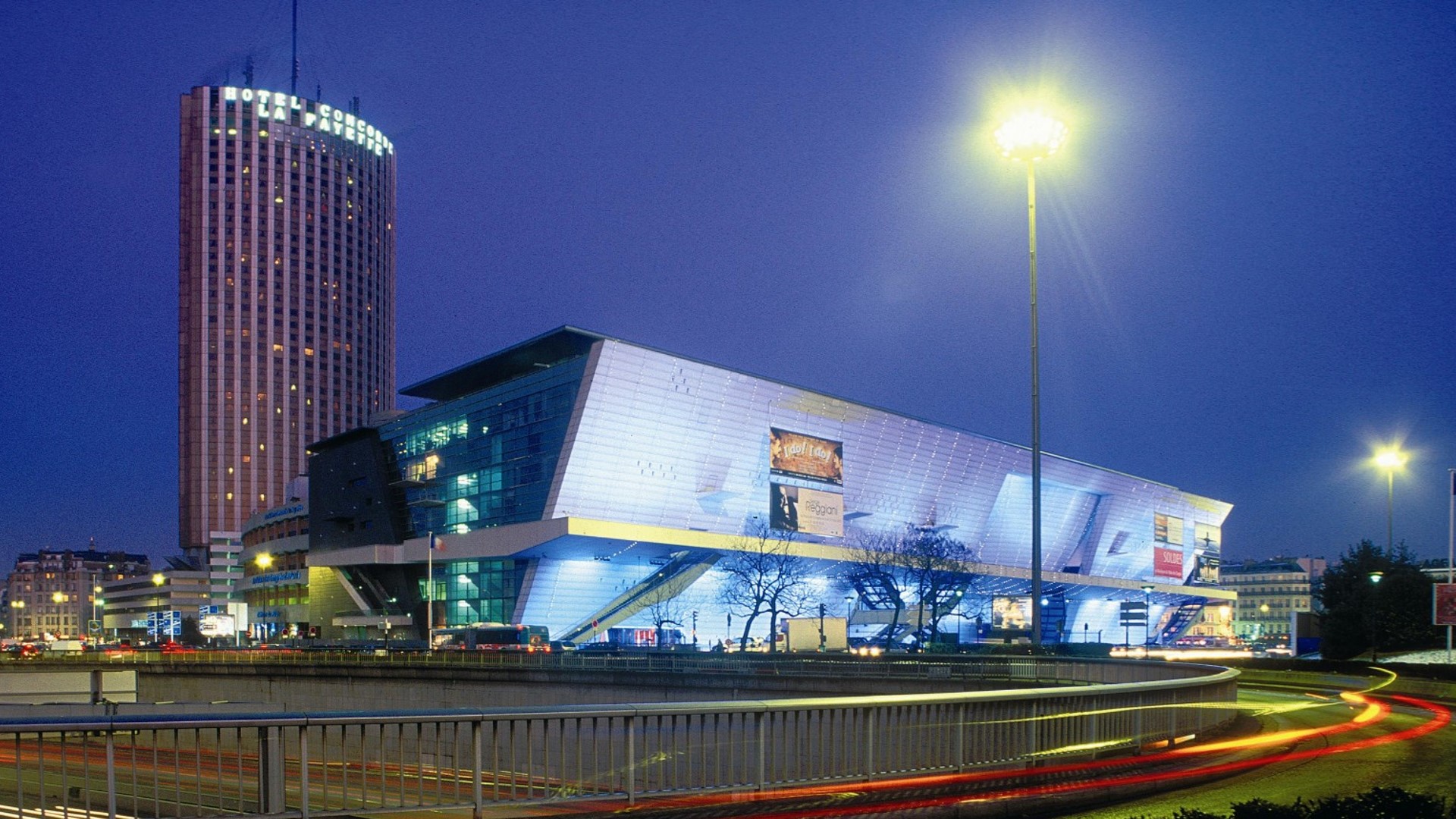 Get your CIGRE Session ticket!

The Council on Large Electric Systems (CIGRE) invites representatives and specialists from the worldwide power industry to participate in its biennial session. The 46th CIGRE Session will take place at the Palais des Congrès in Paris, France from 21 to 26 August 2016. CIGRE is an international non-profit association for promoting the collaboration and knowledge exchange of international experts to improve present and future electric power systems.

The CIGRE Session 2016 is a unique opportunity to meet, listen to and discuss with international power system experts from transmission system operators (TSOs), distribution system operators, energy-related organisations, universities or technology companies. The Session provides official presentations, panel discussions, technical meetings and poster sessions. A social side program with welcome drinks and coffee breaks encourages further discussions in a relaxed atmosphere. The main program will be complemented with a technical exhibition held in the same location presenting new services, tools, equipment, materials and advanced technologies from the field of power systems. Together the CIGRE Session and the technical exhibition assemble more than 8,500 senior executives, engineers and specialists from all over the world.

The coordination between TSOs belongs to the main themes of this year’s CIGRE Session. Therefore the participation of TSO representatives should be particularly beneficial. The other major topisc include the integration of renewables, super grids and smart grids, environment and sustainability, public acceptance of power systems and publicity work, active distribution systems or ecological equipment design. Those whishing to attend the CIGRE Session 2016 can register directly on the CIGRE homepage. 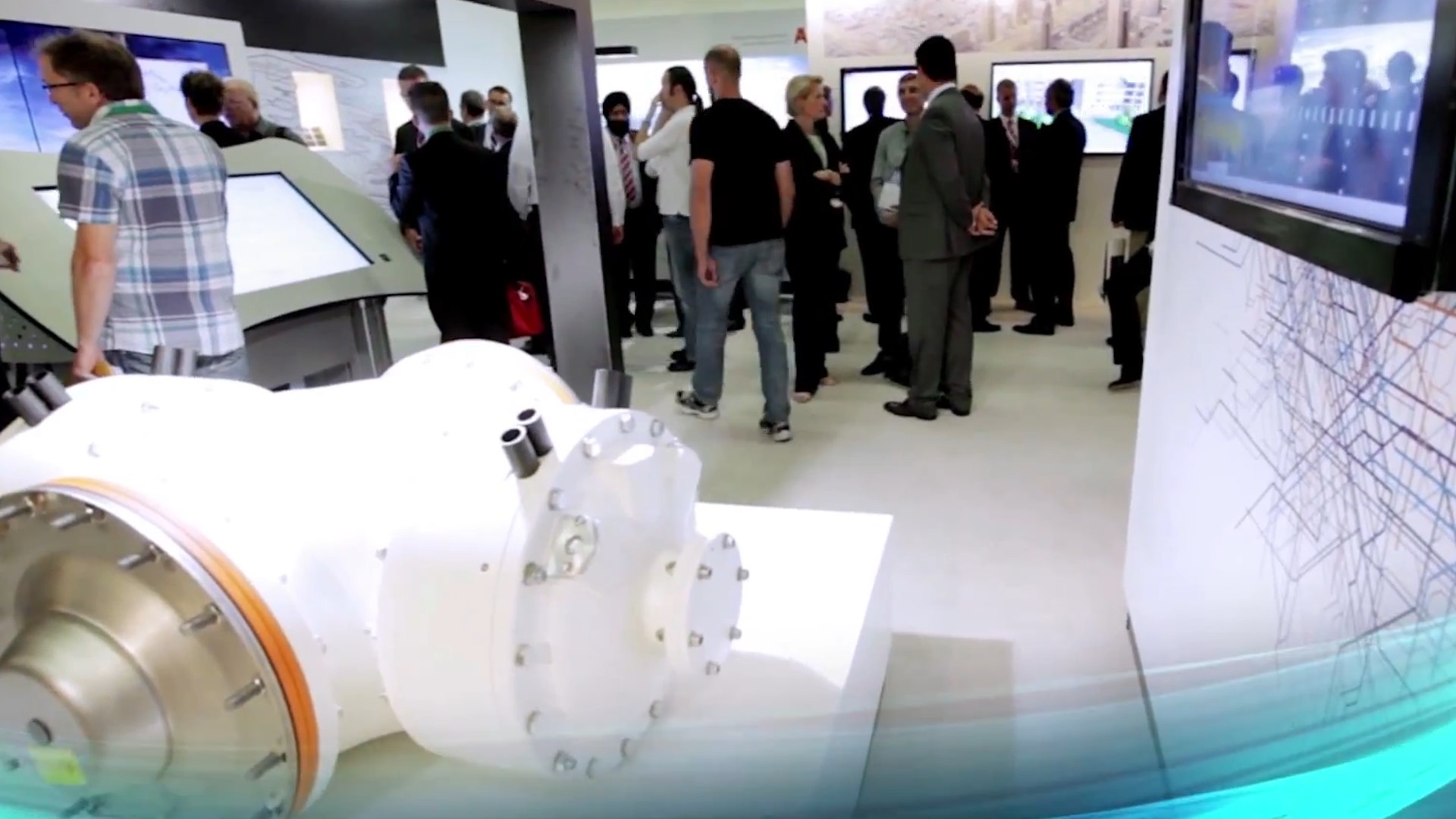 Today the 11th Symposium on Power System Management started in Opatija, Croatia, organised by the Croatian National Committee of Cigré (Conseil International des Grands Reseaux Électriques). Two of the so-called regular papers that are discussed were developed with the collaboration of members of the team at the TSC TSOs – Joint Office:

The pictures above left show Alexander Wirth delivering his speech in Opatija. 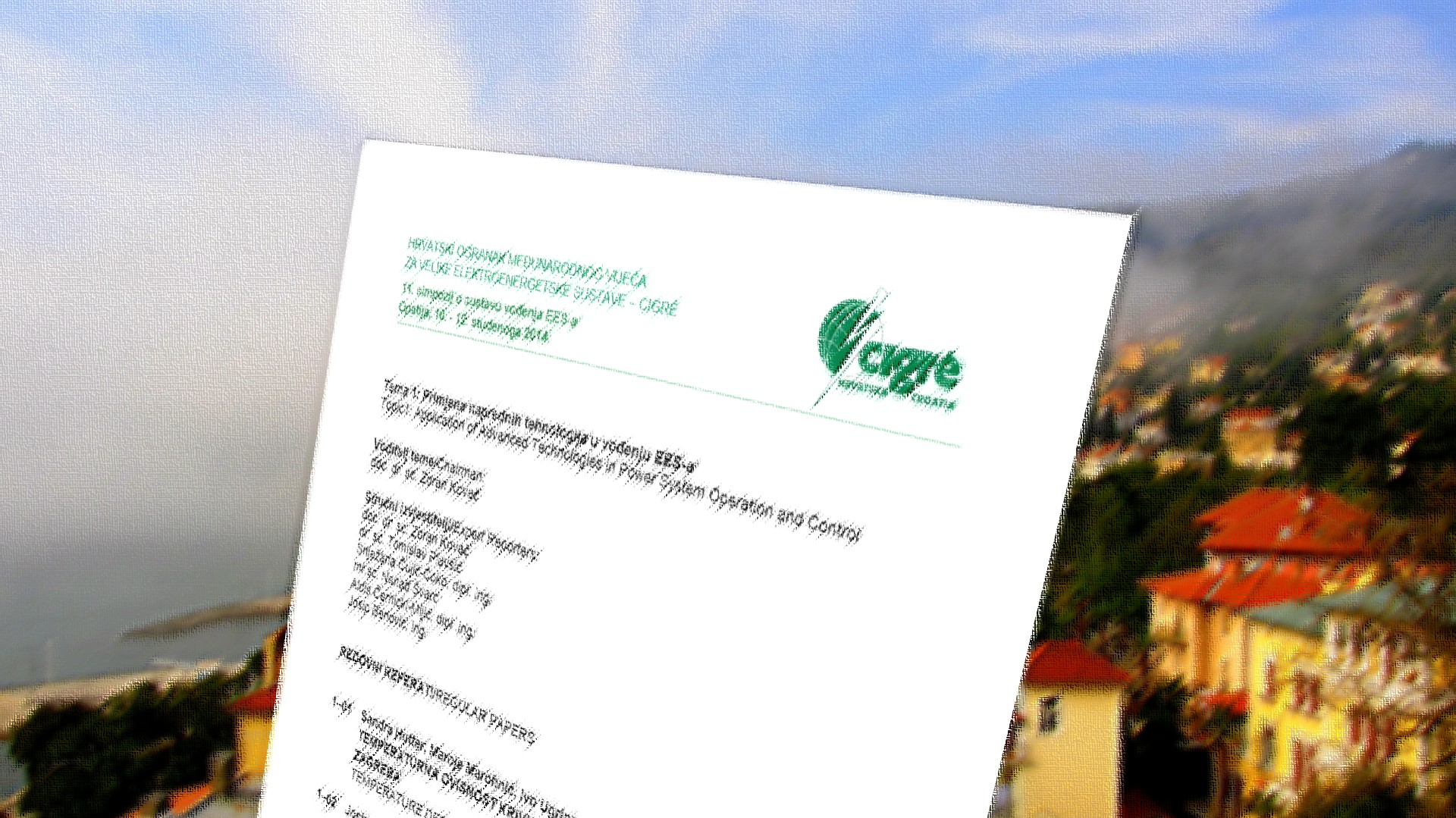 The biennial CIGRE Session in Paris, France is one of the world’s most important grid events. This year a group of experts from Coreso and several TSC TSOs presented a paper about “European TSOs’ cooperation for enhanced system security, integration of renewables and market support”. On 29 August they took also part in one of the so-called Poster Sessions (C2-113). 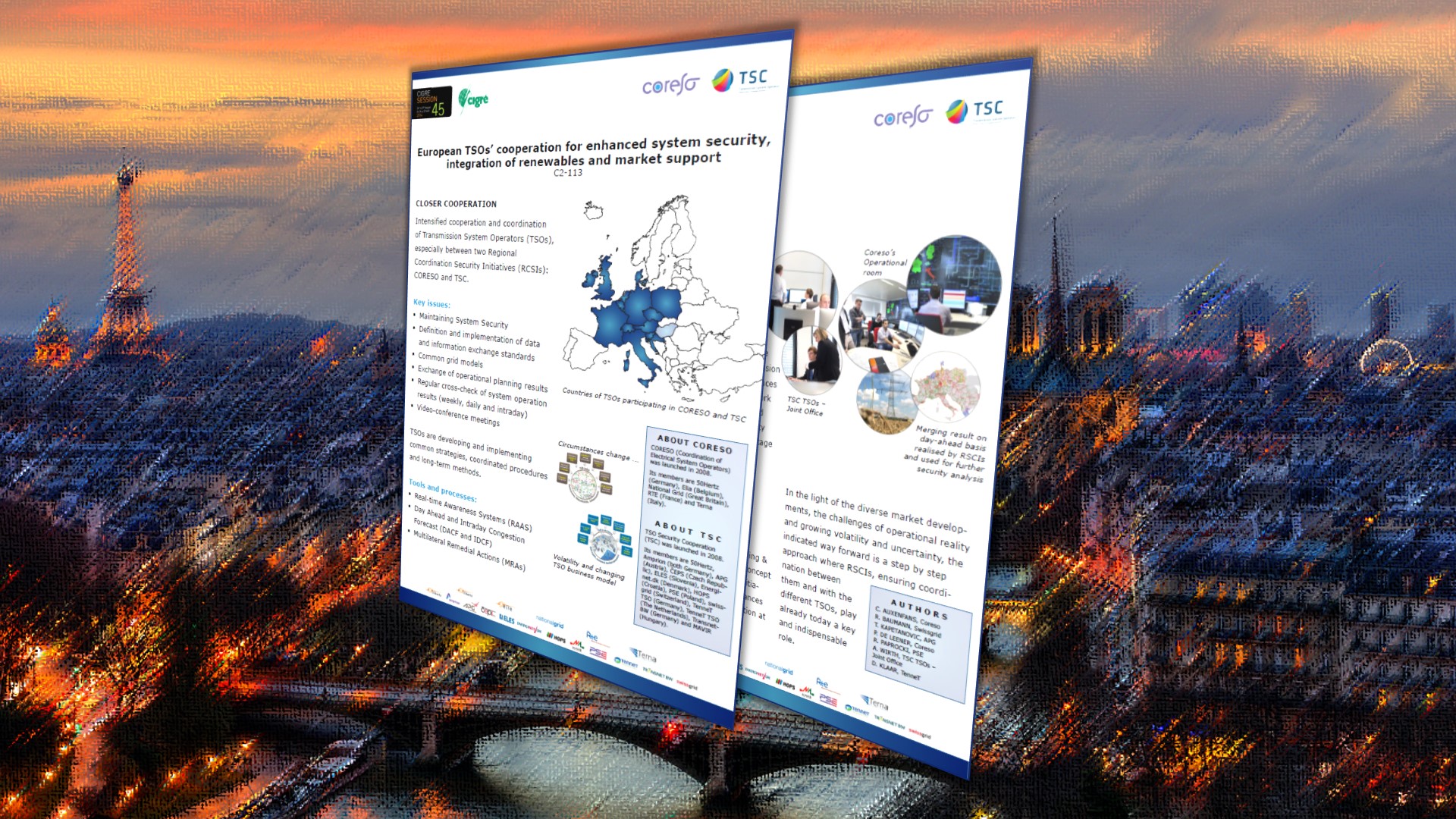